Review of the agrometeorological situation of April 2, 2020 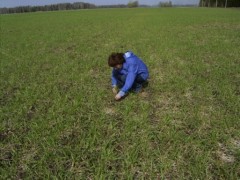 There was a loss of soil moisture, especially from the upper layers due to the deficit of precipitation, low relative humidity and wind gain noted in the third decade of March. Results of instrumental determination of soil moisture at the end of the month showed that productive moisture reserves decreased. Productive moisture reserves are below normal under winter crops in number of areas, mainly in the south-eastern part of the country. Nevertheless, in most areas good moisture supply of crops is still preserved. Moisture reserves are increased on heavy soils in some areas of central and northeastern regions of the country.
Areas with a lack of soil moisture in the southeastern part of the country may expand in the first decade of April due to the expected shortage of precipitation.