Review of the agrometeorological situation of August 27, 2019 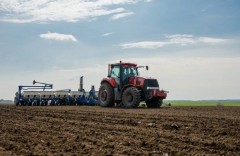 Warm weather without precipitations is favorable for the completion of harvesting, flax straw lift and forage conservation. Agrometeorological conditions for ripening of maize grain, sugar accumulation in sugar beet crops ameliorated.
According to recent data of visual observations, 10 cm topsoil is in a moderate moistened state in most of Belarus that contribute soil treatment for sowing of winter cereal crops and emergence of seedlings of winter rape. It has to be noted that optimal time for sowing of winter rape ends. Rape emerged in the areas sown in the first half of August, leaf formation started. However, moisture loss in topsoil is observed under the influence of increased daily temperatures and sunny weather: 10 cm topsoil is poor moistened in large part of Brest and Gomel regions as well as in some areas of central part and in the north-west of the country.
In the coming days, weather mainly without precipitations with increased temperature will cause further moisture loss in topsoil. Areas with poor moistening of topsoil may increase.