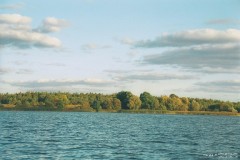 In August 2020, the average air temperature in Belarus was +18.6°C, which is 1.3°C higher than the climatic norm. All three decades were warm. It was warmer in the first and third decade, the average air temperature of which was higher than the norm by 1.6 and 1.8ºС, respectively.
On average, there was a lack of precipitation throughout the country: 58.6 mm fell or 87% of the monthly norm. Some meteorological stations recorded 1.5-2 monthly precipitation norms. During the month, the precipitation was extremely uneven. In the first and second decade of August, there was a strong deficit of precipitation: 19% and 42% of the norm fell, respectively. In the third decade, there was an excess of moisture: 208% of the ten-day norm dropped out.
In the first two decades of August, the rivers showed mainly a decline in water levels and their even course. As a result, on the Western Dvina near Vitebsk, the Dnieper near Mogilev, Zhlobin, Rechitsa and Loyev, the Berezina near Svetlogorsk, the Sozh near Krichev, Slavgorod and Gomel conditions for river transport have become worse. On the Sozh tributary, the Oster near Khodun, the water level dropped below the mark of the water outlet to the floodplain. In the third decade, most rivers showed an increase in water levels due to precipitation.
The minimum water levels in certain sections of the rivers of the Neman, the Viliya and the Pripyat basins approached the multiyear minimums for August, and on the Yaselda near the Bereza (a tributary of the Pripyat) the value of the minimum water level dropped below the historical minimum for this time of year.
In August, the water content of the Berezina was 15-20% less than the norm, the Western Dvina, the Neman, the Viliya, the Western Bug and the Pripyat were half the usual for this time of year. The water content of the Sozh, the Dnieper near Orsha and Rechitsa was higher than the norm by 10-35% and the Dnieper in Mogilev-Zhlobin section by 55-65%.
The average monthly water temperature in the rivers and reservoirs of the country was +16 +23°С, which was close and somewhat lower than usual for this time of year.