Overview of agrometeorological situation of May 15, 2020 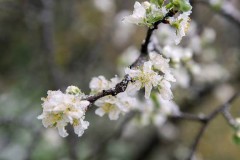 Agrometeorological conditions in the republic got worse due to lowering of temperature regime. Average soil temperature at a depth of 10 cm decreased according to the latest observational data. Cold weather with frost holds emergence and further development of heat-loving crops, growth of vegetative mass of herbs, and is unfavorable for pollination of flowering fruit crops. Flowering of cherries and pears continues in gardens, mass flowering of apple tree is observed in the central part and in the northern region of Belarus. Flowers and ovaries of fruit and berry crops sensitive to freezing. It is advisable to carry out protective measures if there is a threat of frost in the air in gardens. Freezing pose a danger to emergence of heat-loving crops. Corn sprouted, seedlings of early potatoes were noted in some places in the south of the country in the southern regions of the republic in April crops and in areas sown in early May according to observations of weather stations. Potato seedlings can be hardened or mulched, in small areas covered with plastic wrap or spanbond to protect against freezing.
In the coming days there is no need to plant seedlings of thermophilic vegetables due to preservation of night freezing.