Overview of agrometeorological situation of October 13, 2020 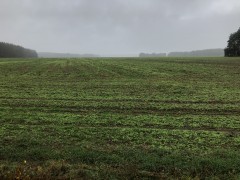 According to the results of instrumental determination of moisture in most of the territory of Belarus in the arable layer of the soil, the moisture reserves are good. In the east of Vitebsk, in some areas of Mogilev oblast is increased. Due to the observed deficit of precipitation in many regions of the western part of Belarus at the time of moisture determination, satisfactory and insufficient reserves of productive moisture remained. Passing rains will also replenish the soil moisture content in the near future.
Warm weather for this time of year and good moisture supply in the main tracts contribute to the development of winter crops.
In the second half of this week, due to the expected decrease in temperature, the development of winter crops will slow down. Conditions for harvesting late crops will worsen.