Review of the agrometeorological situation of April 22, 2020 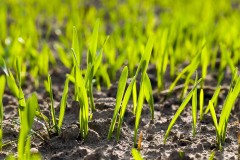 Lack of soil moisture is observed mainly in the upper layers due to the long-term deficit of precipitation. Reserves of productive moisture decreased to satisfactory values on the major part of the country. Moisture reserves are low under winter crops according to some weather stations in the southern regions. Sufficient reserves of productive moisture are preserved in most areas of the northern part of the country.
In the coming days agrometeorological situation will not be changed to the best. Expected short-term rains will possibly supplement moisture reserves. Increase in the temperature regime in combination with a continuing deficit of precipitation will contribute to a further decrease in the soil moisture content on the greater territory of Belarus.