Review of the agrometeorological situation of April 24, 2020 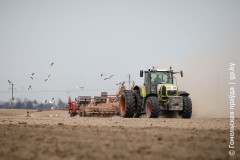 Difficult agrometeorological conditions are formed for soil cultivating, germination of grain and the emergence of seedlings of spring crops, the growth of grasses in connection with the deficit of precipitation. No more than 10-30% of precipitation of climate normal fell on most of the territory over the past period of April. There is a slight moistening of the upper10 cm soil layer of significant part of the country, especially in the southern part of the territory. According to the weather station Vasilevichi the topsoil is completely dried up. Conditions for sowing are better in areas where the top 10-centimeter layer of soil remains in a moderately wet state.
In the coming days expected short-term rains will moisten the topsoil, but not everywhere. Lack of soil moisture will remain on some areas due to the uneven spreading of precipitation.