Review of the agrometeorological situation of August 10, 2018 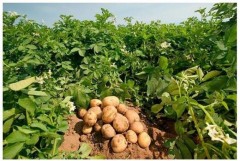 Because of hot weather agrometeorological situations for harvest of potato mid-ripening and late ripening variety have worsened. According to recent observation data, average soil temperature at depth of 10 cm is noticeably higher than optimal values. Potato flowering have finished on practically the whole territory of the Republic, wilting of early and late ripening potato is registered mainly on Gomel region. According to data from Gomel, Minsk and Vitebsk regions, potato plantings are damaged by late blight.
In the coming days, predominance of elevated temperature regime will complicate agrometeorological conditions for tuber growth. Especially this applies to late ripening variety of potato.