Review of the agrometeorological situation of August 16, 2018 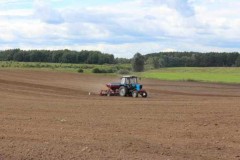 Deficit of precipitation is observed in most of Belarus since the beginning of August. Predominance of elevated temperature regime, coupled with deficit of precipitation, caused intense loss of moisture from topsoil. As a result, 10 cm topsoil is in a weakly-moist state in most of the country, it is completely dry in some areas of Mogilev region, in the north of Brest region and in the west of Vitebsk region. It complicates the conditions for soil preparation to sowing of winter crops and for winter rape sowing. Past recent rains supplemented moisture content in soil mainly in the north-western half of the country. According to recent visual observation data, good moistening of topsoil is registered in Grodno region, in most of Vitebsk region and in north-west of Minsk region, in other regions – only in some areas. Conditions for field work are favourable at such sites.
In the coming days expected intermittent rains may moist topsoil only in certain areas of the Republic improving the conditions for winter rape sowing.