Review of the agrometeorological situation of August 30, 2018 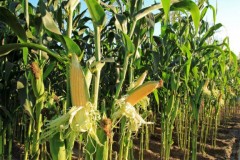 Maize harvest formation, both herbage and seeds, proceeded with good heat provision this year. On average from 900°С to 1100°С of effective temperatures higher than +10°С have accumulated from May to August throughout Vitebsk region and throughout Brest and Gomel regions respectively, which is 210°С and 240-290°С more respectively than average long-term changes for this period and considerably more than last year’s figure. Water availability of maize was below optimal in some areas, especially in southern part of the country, on August. Conditions for grain formation became more complex in such site; herbage state could get worse. Because of excessive temperature and earlier sowing, rates of maize development outpace last year’s. According to recent data of agrometeorological observation, maize-ripening goes in many sites of southern and central parts of the Republic – gold ripeness is observed, complete ripeness – in certain areas. Grain formation is registered on the remaining territories, especially in north-western region of Belarus.
Maize harvesting for silage is conducted in the Republic. It might be useful to conduct seeding harvesting for higher-quality feed. In the coming days weather conditions will contribute to maize grain maturity and harvest.