Review of the agrometeorological situation of December 04, 2018 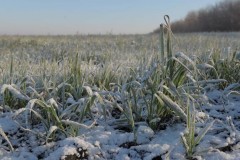 Agrometeorological conditions for beginning of winter cereal crops overwintering are forming satisfactorily. During the second laf of November small snowpack was formed in most of the country except south-eastern part. Soil has been frozen up to 10-20 cm in most of Belarus, in some areas of the western and souther part of the country – up to 25 cm. Depth of freezing is less 10 cm in some areas, mainly in the eastern part and in the north of the Republic.
Decrease of air temperature did not pose a threat for winter cereal crops at the end of November – in the beginning of December. Soil temperature at depth of tillering node of winter cereal crops and root neck of perennial grass did not decrease up to dangerous levels, it decreased up to -7 - 10°С. At the time of cooling because of insufficient snowpack on the fields, damages for winter rape as a plant that resists cold, cannot be ruled out in certain sites of southern and western parts of Gomel region and in the east of Brest region where air temperature has been decreasing up to -14 -19°С.
In the coming days low temperatures that could pose threat to winter crops are not expected.