Review of the agrometeorological situation of December 12, 2018 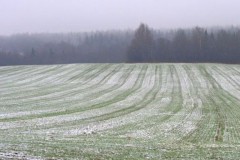 Thaw weather settled at the end of the first decade of December contribute to snow cover destruction. There is no snow cover in the south-western part of the Republic and in the western part of Gomel region. There is a defrosting of topsoil. Thickness of frozen ground ranged from 5-10 cm to 15-20 cm on most of Belarus, it reached 24-34 cm in the north-west and north-east only according to certain meteorological stations. Soil temperature  at depth of tillering zone of winter cereal crops and root neck of perennial grass is a little bit higher than optimal values.
Temperature decrease expected at the end of current week is not dangerous for winter sowings. Agrometeorological conditions for crops wintering will remain satisfactory.