Review of the agrometeorological situation of January 11, 2019 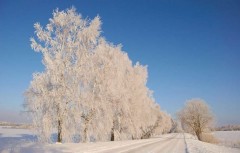 Agrometeorological conditions for overwintering of winter crops and perennial grass are satisfactory. Low temperatures of last nights did not have an adverse effect on them. Snow cover protected winter crops from damages on most of the territory, its thickness fluctuates from 10 cm to 25 cm, in some eastern areas – 30-35 cm. However, snow cover height did not exceed 3-5 cm in certain areas of Brest region, it is not unlikely that winter rape sustained damage from the low temperatures.
According to recent observational data, depth of soil freezing fluctuates from 5 cm to 15 cm on most of Belarus, except north region and certain areas of Brest region where it is about 20-35 cm. Depth of freezing is less than 5 cm or soil is thawed in the south-eastern part of the Republic and some central parts. With the snow cover on fields and soft soil freezing, temperature at depth of tillering node of winter crops is above optimal values and ranges mostly -1, +1°С. Such agrometeorological conditions are the cause of increased consumption of accumulated nutrients that can lead to sowings weakness.
For more detailed crop condition assessment branch off of winter crops will be held on January.