Review of the agrometeorological situation of January 3, 2019 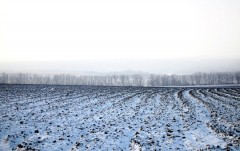 Agrometeorological conditions for winter crops are satisfactory.
Till the end of December snow cover was melting under the influence of thawing weather on most of Brest and Gomel regions as well as in the western part of Gomel region, complete thawing of soil was also observed. Soil freezing fluctuated from 5-10 cm to 15-20 cm in the remain territory of the country, according to data of certain meteorological stations, it reached 26-42 cm in the north-east and north-west of Belarus. Soil temperature at depth of tillering node of winter cereal crops and root neck of perennial grass is higher than optimal values. Excess flow of nutrients is registered under the snow cover with weak frost penetration of soil with overwintering crops.
In the coming days snow depth will increase, snow cover will protect winter crops sowings from expected decrease of air temperature at the end of the week.