Review of the agrometeorological situation of January 4, 2020 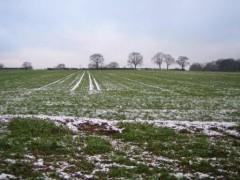 According to the results of snow shooting on December 31 on the greater territory of Belarus on fields was observed small snow cover generally from 1 cm to 8 cm high. Snow cover is not observed in fields in the south-west of the republic. Snow cover has almost collapsed under the influence of thaw weather. The soil remains mostly thawed, slight freezing of the upper layer is observed. Agrometeorological conditions for winter crops are satisfactory. The soil temperature at the depth of the tillering site of winter cereals and the root neck of perennial grasses is mainly in the range 0, + 2 ° C, only in some areas in the east of the republic on some nights of last five days of December soil temperature dropped to negative values.
Plants lose their hardening under such agrometeorological conditions.
In coming days significant changes in agrometeorological conditions are not expected. Low temperatures that could cause a risk to wintering crops are not predicted.