Review of the agrometeorological situation of July 24, 2018 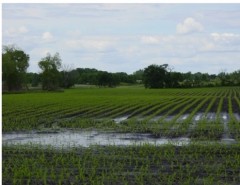 According to recent data, excessive moistening of 10 cm topsoil was registered after past rains in most areas of the eastern part of the country as well as in some districts of the northern region of Belarus. Agrometeorological conditions for cereal crops, flax harvesting and perennial grass mowing are unfavourable. Frequent rains limit harvest work, equipment operations hampered by overmoistened lands. Torrential rains with strong winds caused lodging of spiked cereals in the east of Vitebsk region, in central and eastern areas of Mogilev region and in some areas of Minsk region. Lodging of linen flax is registered in some areas in the east of the Republic.
Based on instrumental measure moisture made on 18 July, moisture content of the soil is sufficient in most of the Republic. There is in general from 45 mm to 125 mm in the half-meter layer under cereal crops, maize, potato, root crops and herbs and from 20 to 50 mm of moisture content in the tilth-top soil. Moisture content is excessive in some areas of Mogilev, Vitebsk and Minsk regions – more than 125 mm in the half-meter layer, more than 55 mm of efficient moisture in the tilth-top soil.
Because of expected erratic weather conditions with rains in near time, grain ripening and grain drying will be retarded, number of areas with excessive moisture will increase.