Review of the agrometeorological situation of June 12, 2019 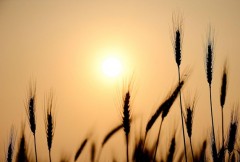 Because of deficit of precipitations, decrease of moisture content in soil was observed throughout the country in the first decade of June. Areas with deficit of soil moisture spread in the south-east part of Belarus, in the east and west. According to the results of instrumental measurement of soil moisture, moisture content is low mainly under cereal crops in the northern part of Gomel region, in the south-west of Mogilev region, in the south-west of Grodno region and in certain areas of the remain regions. According to the results of meteorological stations Gomel and Oktyabr, plowing layer and 1,5 m layer are almost completely dried up. Plants flagging, yellowing and leaves drying out are observed on the areas with insufficient water availability, drying up of stems has started. Sufficient moisture content in soil remain on most of Brest, Minsk and Vitebsk regions.
In the coming days, hot weather with deficit of precipitations will cause further loss of soil moisture. Conditions for formation of agricultural crops will worsen.