Review of the agrometeorological situation of June 22, 2018 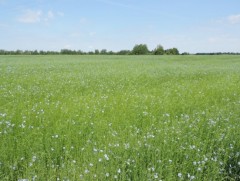 Persistent precipitation deficit had translated into lower stored soil moisture in most of the Belarus in the second ten-day period of June. Based on instrumental measurement of soil moisture dated June, 18, soil drought continued in large parts of the country primarily under spiked cereals, flax, rapeseed and herbs. Deposit of efficient soil moisture is low almost in the entire Grodno, Brest and Gomel regions as well as in the western part of Minsk region and in places of Vitebsk region.  Topsoil and half-meter soil layer under the above plant crops are almost completely parched in many observed fields in Brest and Grodno regions. According to information of some weather stations there is a moisture deficit under corn, potato and root crops.
Good water availability of agricultural crops is observed in most of the Mogilev region, in some areas of Minsk and Vitebsk regions as well as in Gomel region, where there were more intensive rainfalls in the second ten-day period of June.
Tonight rainfalls and rainfalls expected in the following days should increase water availability of agricultural crops. However unbalanced distribution of precipitation and heavy soil drying out can cause moisture deficit in some areas.