Review of the agrometeorological situation of June 5, 2018 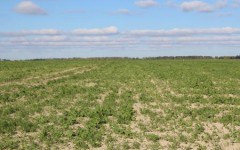 Prolonged deficiency of rainfall combined with increased temperature degrades the agrometeorological conditions for the growth of crops. The development of winter crops is one and a half to two weeks ahead of last year's terms. Everywhere winter crops were killed, in a large area of the country they began to bloom. In spring grain crops on the main massifs the growth of a stalk is observed, on early crops in the southern areas the beginning of earing is noted. According to the data of some weather stations, the condition of grain crops deteriorated due to drought, yellowing of leaves was noted, places in Gomel and Minsk region began drying plants. Drought can negatively affect the growth of vegetative mass and productivity of the ear, in areas with low soil moisture content, additional discharge of shoots, increase in the number of underdeveloped ears, which will lead to the formation of a smaller ear and to a decrease in the crop. High temperatures and lack of moisture are unfavorable for the growth of the flax stem, for the regrowth of herbs after mowing.
According to the latest data of visual observations in the greater territory of the Republic, the upper 10-centimeter layer of soil is in a slightly damp state, in some areas it is completely dried, which complicates the loosening of the rows of vegetable crops, potato hilling, vegetable crops require additional watering. At the same time, weather conditions are favorable for fodder harvesting and hay harvesting.
In the near future, the expected local rains do not eliminate soil drought, agrometeorological conditions will remain quite difficult. Projected in some areas in Polesie freezing dangerous, especially for heat-loving vegetable crops cultivated in the open ground.