Review of the agrometeorological situation of May 17, 2019 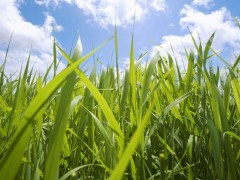 Past rains fulfilled moisture content in soil on most of the territory of Belarus, they caused overmoistening in the south-west part of the country. According to recent data of visual observations, 10 cm topsoil is heavy moistened in many areas of Grodno and Brest regions as well as in the south-east of Vitebsk and Gomel regions. Topsoil is in a moderate moistened state on the remain area of the Republic, deficit of soil moisture is observed only in the west of Vitebsk region.
In the coming days, agrometeorological conditions will remain favorable for further growth and development of plants. There won’t be any significant precipitations on most of Belarus, except south-west areas, that will contribute to drying of overmoistened sites. Together with warm weather, it will allow agricultural enterprises to finish sowing of heat-loving plants, fertilize and do chemical treatment of sowings from weeds. However, agrometeorological conditions for sowing finishing and emergence of seedlings of heat-loving plants won’t ameliorate in the areas with poor moistening of topsoil, further loss of soil moisture.