Review of the agrometeorological situation of May 28, 2018 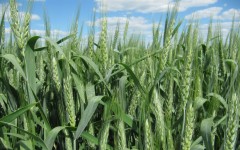 On the main massifs at winter grain crops earning is observed, mainly in the Brest region flowering is noted. In some Central areas and in the North-Eastern part of the country on winter crops continues to grow stem. The development of winter crops in the greater territory of the Republic is one and a half weeks ahead of last year's terms, in some places-almost two weeks. In spring crops on the main areas there is an exit into the tube and the growth of the stem, on late crops of the 3rd leaf and tillering. Due to the shortage of precipitation observed since the beginning of the growing season, light soils in some areas of the southern and Central regions, as well as in places in the West of the Republic under grain crops, there is a lack of moisture, which worsens the agro-meteorological conditions for the formation of the crop. According to some weather stations in the observed fields, the condition of grain crops deteriorated, yellowing and twisting of leaves were noted.
The preservation of the deficit of precipitation is expected in the near future will lead to a further reduction in stocks of moisture in the soil and expanding the areas with insufficient moisture, especially in the southern half of the country. Drought can cause side shoots to drop, negatively affect the productivity of the ear, possibly increasing the number of underdeveloped ears, which will lead to the formation of smaller ears and reduce the yield of crops.
Expected at the end of the week in some places in the North-East of Belarus, freezing is dangerous for heat-loving crops.