Review of the agrometeorological situation of November 2, 2018 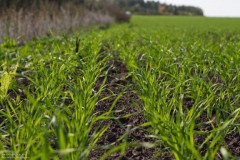 Past rains of the third decade of October fulfilled moisture content in soil in most of the country. According to operational determination of soil moisture, moisture content under winter crops is sufficient in the tilth-top soil of main lands, moisture content on the heavy lands is increased in some areas of Vitebsk region.
According to recent data, tillering is observed on most of the fields with wheat and rye as well as with triticale in southern regions of the Republic. According to visual assessment, the state of winter cereal crops is good on the observed fields, in some areas – satisfactory.
In the first decade of December under the influence of moderate warm weather for this period, vegetation of winter crops continues that will contribute to get additional development.