Review of the agrometeorological situation of November 21, 2018 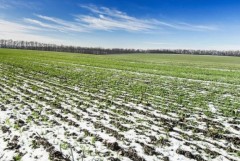 For assessment of winter crops state enroute observation was held. According to its results, tillering of winter cereal crops (optimal phase for overwintering) was registered on bigger amount of areas than last year. Winter cereal crops density is in generally gooat at the observed sites. On average 2-3 sprouts were formed on 1 plant. Sowings are in a good state in most of the country. There are 7% of winter cereal crops that are in a seadling stage on average across the country, 19% - in Grodno region.
Winter rape state is good on 91% of examined fields. Most of the fields with satisfactory state are situated in Grodno and Vitebsk regions – 21% and 29% respectively. There are 5-8 leaves on the leaf rosette of winter rape. There are overgrown sowings (with 13-14 leaves at some of them) on in Brest and Gomel regions.
In case of the appearance of unfavorable weather conditions in winter (severe frost, sudden change of temperature with insufficient snow pack), less developed and overgrown sowings of winter crops are the most vulnerable to its impact.