Review of the agrometeorological situation of October, 23, 2018 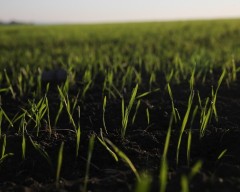 Because of predominance of dry weather, soil moisture content have decreased in the second decade of October, lands with moisture deficit under winter crops have increased. According to operational determination of soil moisture, content of productive moisture in the ploughing horizon are lowered in many areas of Brest and Gomel regions, in many areas of Grodno region and in the south-west of Vitebsk region. Moisture deficit complicates agrometeorological conditions for rootage and winter crops development. Content of productive moisture in soil remains sufficient for growth and development of winter cereal crops and winter rape in the north-eastern part and in the central region of Belarus.
In recent days because of air temperature decrease, development of winter crops has slowed down. Tillering of winter cereal crops is continuing on the fields sown in the first half of September, third leaf and seedlings are observed on the later sowings. Seeding density of winter cereal crops is, in general, good.
In the coming days expected rains will ameliorate water availability of winter crops. However, because of temperature decrease, vegetation of winter crops will not be active. Conditions for harvest works will worsen.