March of 2020 was warm. Averaged monthly temperature in March +3,6°С that is 3,4°С above climate normal.  Such warm March on the territory of Belarus happens once in 10-15 years.
Deviations of average air temperature from climate normal in March in the Republic of Belarus 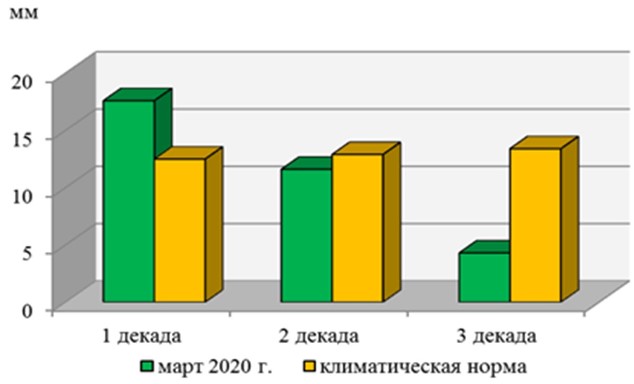 Precipitation fell out mainly in forms of rain, snow, wet snow. Snow cover was absent on the bigger part of the country, it preserved for a short time only in places of the fall of precipitation. As for the last days of the month snow cover of 0,1 – 6 cm was observed mainly on the east and south-east of the country.
Fog, ice, sleet were observed in separate days in the republic. Thunderstorms, hails (up to 6 mm in Gomel on March 14), wind gusts of 20 m/s or more were observed in some areas. The maximum wind speed, which reached the hazardous criteria, was recorded at the station Oshmyany (25 m/s) on March 13 and Grodno (27 m/s) on March 14. A snowstorm was observed in Grodno on March 14.