Overview of agrometeorological situation of June 26, 2020 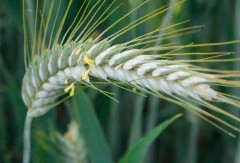 Winter crops are forming a caryopsis,  flowering is ending in some places in the north of the republic according to the latest observational data. Mostly in southern regions and in the west of the country began pouring grain, marked milk ripeness. Development of winter crops is two weeks behind last year according to a number of weather stations. A productive stalk formed denser on observational sections than last year. Condition of winter crops is generally good.
Prevalence of moderate temperature regime combined with an abundance of moisture in most of the republic’s territory will contribute to the pouring of an ear of grain crops. Onset of wax ripeness of winter crops on the main massifs is expected in the first half of July according to calculations, it is expected at the end of the second decade of July in some places in the northern part of Belarus.