Climate characteristic of May 2020

Average air temperature in May 2020 was +11,0°С that is 2,4°С below climate normal. Last coldest May was observed in 1999.  Such temperature in May appears in May every 6 years from 1945.
Negative anomaly spread out all over the territory of Belarus and reached the biggest values in Gomel region (-2,8°С), the smallest values were reached in Vitebsk region (2,1°С).
Deviations of average air temperature from climate normal in May in the Republic of Belarus

Daily temperature generally increased up to + 15 °С and higher, and up to + 20°С and higher in the warmest days. The maximum value of air temperature (+ 28.9 °С) was observed in Zhitkovichi on May 11.
Night air temperatures ranged from + 1 °C to + 10 °C, and in some warm nights it increased up to +11 + 14 ° C, in the coldest nights frosts were observed in places with air temperature up to -1 -3 ° C. The minimum temperature for the month (-3.7 °C) was reached in Berezinsky Reserve on May 1.
All decades of the month were characterized by average temperature below the climate normal. The second decade of May was the coldest was with an average decade temperature of 4.0 °C below normal. The first decade was below the norm by 0.4 °С, the third decade was below the norm by 2.9 °С.
Average air temperature for decades and climate normal in May 2020 in the Republic of Belarus 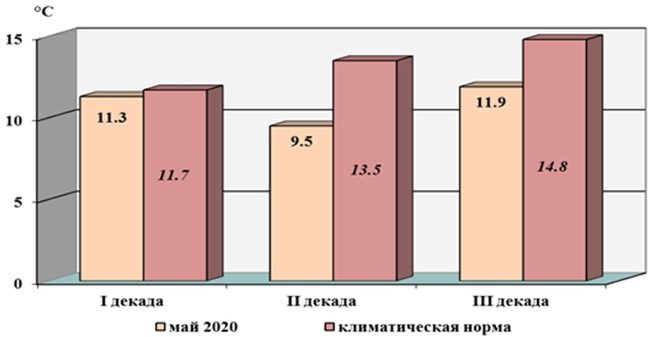 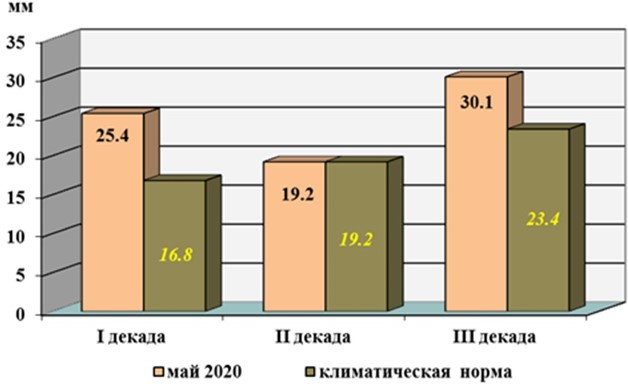 Precipitation fell out often, their amount in places exceeded 20 mm on a certain days. Maximum daily rainfall (41.0 mm) was recorded on May 7 in Kostyukovichi and on May 30 in Gantsevichi. Rains in places were accompanied by thunderstorms, hail and wind gusts up to 15-22 m /s. The maximum wind speed (22 m/s) was recorded on in Gorki May 12.