The average air temperature in Belarus for the summer season of 2020 was +18.8°С, which is 1.4°С higher than the climatic norm. The past season was ranked as 11th of the 140-year ranked series of observations from warmest to coldest. The positive anomaly spread throughout Belarus, reaching the highest values in the Gomel and Grodno regions (1.7°C). 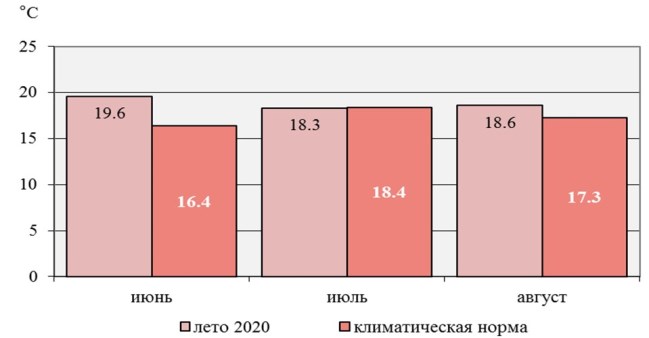 Precipitation by months of summer 2020 and climatic norm for the territory of Belarus
The rains were mostly torrential, often accompanied by thunderstorms and increased winds. In some places hail fell, which in June reached the criterion of a dangerous event. On some days in June and July, the rains were very heavy and in some places reached the criteria for a dangerous event. Fogs were observed in some areas at night and in the morning.