Review of the agrometeorological situation of April 26, 2019 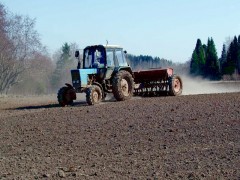 Under the influence of sunny warm weather, areas with poor moistening of topsoil increased throughout the Republic of Belarus. According to data of meteorological station Slavgorod, topsoil is dry at observation point. Sufficient soil moistening at depth of 10 cm is registered only in certain areas of the country.
Because of precipitation deficit in topsoil and erratic temperature in April, seedlings of spring cereals will appear in 1,5-2 weeks after sowing. Spring cereal crops sowed before mid-April came up on most of observed fields, third leaf appeared on the earliest sowings in the south and the west of Belarus. According to recent data of observations at depth of 10 cm, soil warmed up to +11 +15°С. Such temperatures are favourable for maize sowing and potato planting that allowed to increase the pace of heat-loving plants sowing.
In the coming days, expected rains will fulfill moisture content in topsoil in certain areas, mainly in southern and western parts of the country.