Review of the agrometeorological situation of July 12, 2018 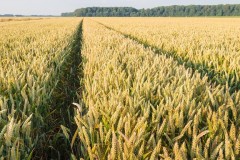 In the first decade of July, water availability of agricultural crops has improved after past heavy rains. Based on instrumental measure moisture made on 8, July by meteorological stations, moisture content of the soil under cereal crops is sufficient in most of the Republic. Moisture content of the soil is satisfactory only in the extreme western regions. Deposits of moisture are increased in the eastern part of Vitebsk region, in the northern and in some central parts of Mogilev region. Sufficient water availability will have a positive impact on cereal crops harvest in the final stage – in the areas where maturity has not yet started, primarily, of summer crops, grain filling will be longer. Moderate warm weather coupled with moisture sufficiency is favorable for corn, root crops, potato, vegetables and herbs growing after mowing.
In the second decade of July, expected rains will support sufficient water availability of agricultural crops in most of the fields. However, quantity of fields with overwatering could increase on heavy soils. Crops at such sites are more vulnerable to lodging, germination of weeds is more intense as well as disease development. Rains in the coming days will make it difficult to gather winter rape and cereal crops.