Review of the agrometeorological situation of June 12, 2018 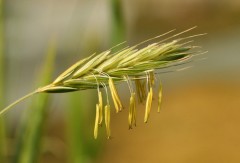 Most of the territory of Belarus is facing an unfavourable agricultural meteorological situation. Long-term shortage of precipitation contributes to further desiccation of the soil. In the first decade of June, small local rains did not improve soil moisture, there was practically no rain in the large territory of the Republic.
In most areas of the country, primarily under crops, productive moisture reserves are low. According to some weather stations, the arable and half-meter layers are almost completely dried. Yellowing, twisting and drying of leaves, yellowing of ear-bearing scales are observed on the crops of cereal crops.
From crops, grasses, flax, undergoing the greatest impact of the drought, the drying of the stems. The most damaged by drought crops of winter crops in the Gomel region are removed for haylage. Moisture supply of corn, potatoes, root crops in the first decade of June in many areas has also deteriorated.
In the Gomel region began withering of corn. Good and satisfactory soil moisture reserves remain mainly in the North-Eastern part of the Republic and in some Central areas.
Due to the uneven distribution of rain and severe soil desiccation, many areas will continue to suffer from water shortages in the near future.