Review of the agrometeorological situation of October, 17, 2018 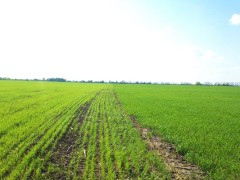 Settled warm weather promotes vegetation of winter crops. On average, appr. from 340°С of the effective temperatures higher than +5°С have accumulated in the Vitebsk region and to 390°С in the Gomel region. Accumulated sum of effective warmth is 90-115°С more than average multiyear values. According to recent observation data, tillering is registered on the winter cereal crops sown before mid-September. Seedlings and third leaf are observed on the sowings conducted at a later date. Formation of leaf rosette continues on winter rape.
According to visual observation data, 10 cm topsoil is in a moderate moistened state in most of the territory of Belarus that contributes to the conducting of agrotechnical activities for winter crops treatment and fall ploughing. However, because of continuing deficit of precipitation, topsoil is poor moistened in some areas of southern part of the country, it is dry in some central parts of Gomel region that worsens conditions for soil treatment.
In the coming days, weather, mainly sunny, will be favourable for harvest works. Because of expected deteriorated weather conditions in the third decade of October, it is recommended to finish harvest of potato, maize for silage and grain, late vegetables.