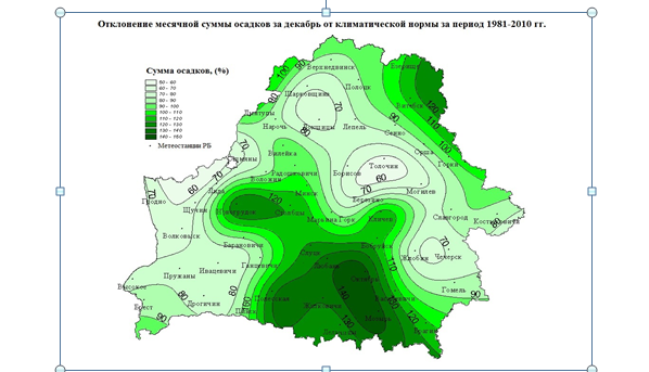 The amount of precipitation in December 2021 and the climatic norm
by regions and across the territory of Belarus
During the month precipitation fell unevenly. In the first and third decades, there was a shortage of precipitation (68 and 51% of the norm, respectively), in the second decade excessive moisture was noted (160% of the norm dropped out).

Rainfall and climatic norm through the decades of December 2021 across the territory of Belarus
Precipitation fell in the form of rain, snow and sleet. During the month the snow cover was repeatedly established for a short time and destroyed. On the last day of the month the height of the snow cover ranged from 0.1 cm (Pruzhany) to 15 cm (Ezerishche), at Vysokoe, Brest, Lelchitsy stations, there was no snow cover.
In some places, an increase in wind speed by gusts of up to 15 m/s and more was noted. The maximum wind speed of 18 m/s was recorded at stations Novogrudok on December 2 and Drogichin on December 19. Fogs, sleet and ice cover were observed in some areas.