The average air temperature in Belarus for the second summer month of 2021 was +22.5°C, which is 4.1°C higher than the climatic norm. July 2021 ranked 2nd in a ranked series of observations from warmest to coldest since 1881. The first place with a slight excess of 0.1°С belongs to July 2010. The above zero temperature anomaly spread throughout the country and was in the range of 4.0-4.2°C. 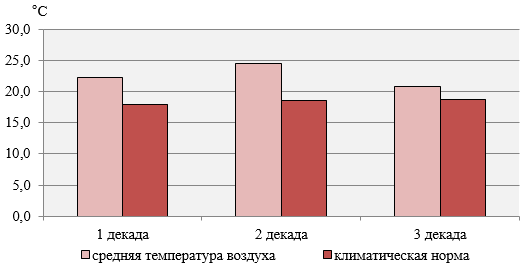 Average air temperature and climatic norm
through the decades of July 2021 across the territory of Belarus
The air temperature at night during the month was mainly within +15 + 20°С, and in the coldest nights it dropped to +10 +14°С and below. The minimum temperature value (+6.8°С) was recorded at the Yezerishche and Lyntupy stations on July 22. 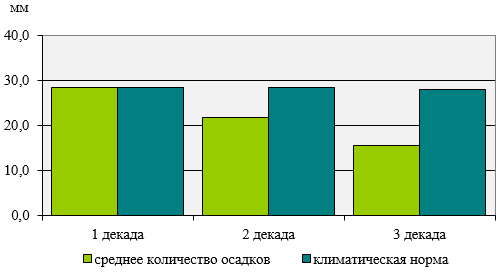 Precipitation and climatic norm
through the decades of July 2021 across the territory of Belarus
Precipitation was predominantly of a torrential nature, in places it was accompanied by thunderstorms and hail, in some areas the rains reached the criterion of a dangerous phenomenon. Fogs were observed in some places at night and in the morning. In some areas, wind intensification by gusts of up to 15 m/s and more was noted. The maximum wind speed was recorded at Volozhin station on July 17 (24 m/s).