The average air temperature in Belarus in March 2021 was +1.1°C, which is 0.9°C higher than the climatic norm. 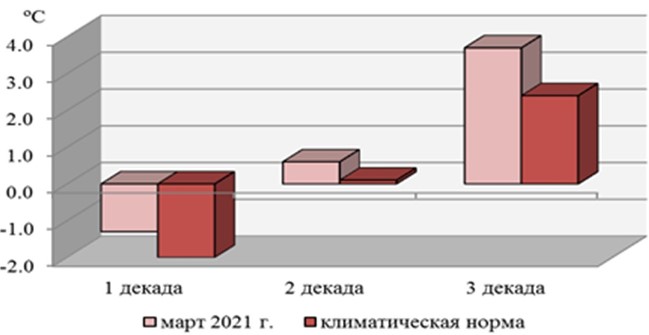 Average air temperature for decades of March 2021
and climatic norm for the Republic of Belarus
On average, 26.7 mm of precipitation fell in Belarus in March, which amounted to 68% of the climatic norm. Moisture deficit was observed throughout the country, with the exception of individual observation points in Vitebsk (Ezerishche, Vitebsk) and Gomel regions (Zhitkovichi), where the climatic norm and more precipitation fell during the month. The smallest amount was noted in the Brest region (19.1 mm of precipitation or 53% of the norm). The largest number was noted in the Vitebsk region (33.1 mm or 79% of the norm).

Rainfall for March 2021 and climate norm
by regions and across the territory of the Republic of Belarus
Precipitation in Belarus fell unevenly throughout the month. The first and third decades were dry, during which 31 and 42% of the ten-day norm fell, respectively. In the second decade, on average, the country received 133% of the ten-day precipitation rate. 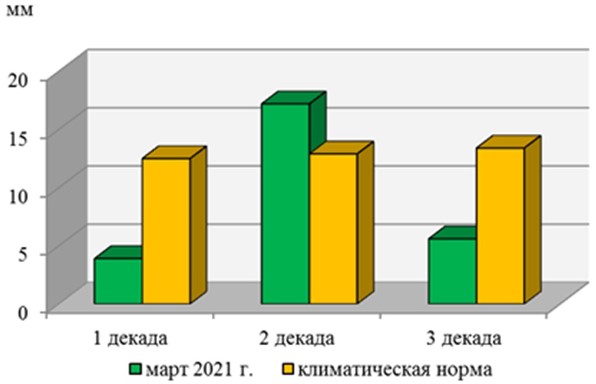 Precipitation by decades in March 2021
and climatic norm for the Republic of Belarus
Precipitation fell in the form of rain, snow and sleet. In the first or second decades of March, the snow cover continued to collapse on the territory of the Vitebsk and Brest regions, while the rest of the country began to break down. On the last day of the month, snow cover was absent everywhere.
In March, an increase in wind speed with gusts of up to 15 m/s and more was noted. The maximum wind speed was recorded in Soligorsk on March 7 and amounted to 22 m/s. On some days, snowstorms, fogs, icy and frost phenomena were observed in places, icy roads were observed on the roads.