The average air temperature in Belarus for the last autumn month of 2021 was + 3.3°С (the probability of not exceeding 94%), which is 2.4°С higher than the climatic norm. November 2021 was ranked 5th from highest to lowest in the series of observations since 1945.

Deviation of the average air temperature in November from the climatic norm for the period 1981-2021
The above zero air temperature anomaly spread throughout the country and was in the range of 1.5-3.5°С, reaching the highest values ​​in the east (3.0 ° С and more). The smallest positive anomalies were noted in the north-west (Naroch and Vileyka) and in the extreme north-east and amounted to 2.0°С or less. 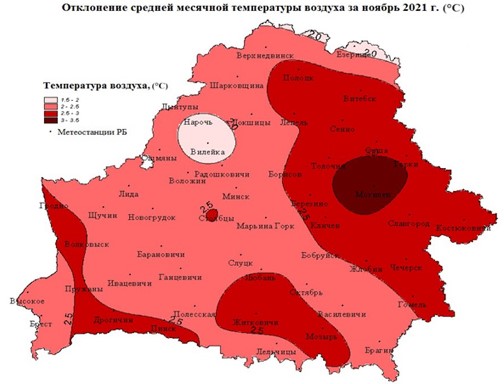 Deviation (°С) of the average air temperature in November
from the climatic norm on the territory of Belarus
In the regional context, the greatest above zero air temperature anomaly for the month was noted in the Mogilev region (on average, 2.7°C in the region). The smallest is in Brest (regional average 2.3°C).
The air temperature in all three decades was significantly higher than normal. The average temperature in the first decade was 2.9 ° C above the norm, in the second - by 1.8°C, in the third - by 2.7°C.

Average air temperature and climatic norm
through the decades of November 2021 across the territory of Belarus
The air temperature during the day during the month was mainly positive and was within the range of +1 +12ºС, and on some days it dropped to negative values. At stations Vitebsk, Ezerishche, Polotsk and Senno, 95% daily temperature extremes were exceeded. The maximum air temperature for the month was recorded at Bragin station on November 5 and amounted to +15.5°С.
The air temperature at night during the month was mainly in the range of -7 +8°С, and in the coldest nights in some places it dropped to -10°С and below. The minimum temperature value (-12.6°С) was noted at Bobruisk station on November 23.
During the month, an average of 52.9 mm of precipitation fell in the republic, which amounted to 115% of the climatic norm. Over the territory of the country, precipitation fell unevenly: in the north and north-west of the country, 150% of the norm and more fell. Less than 90% of the norm fell in the southwest and southeast of the country. 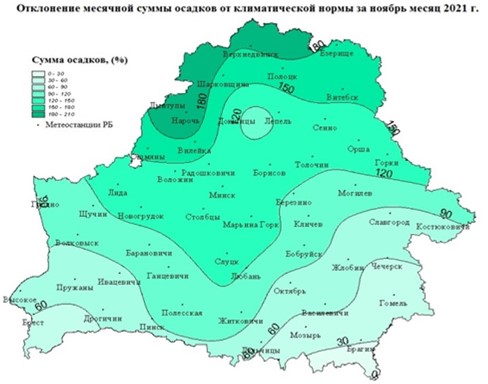 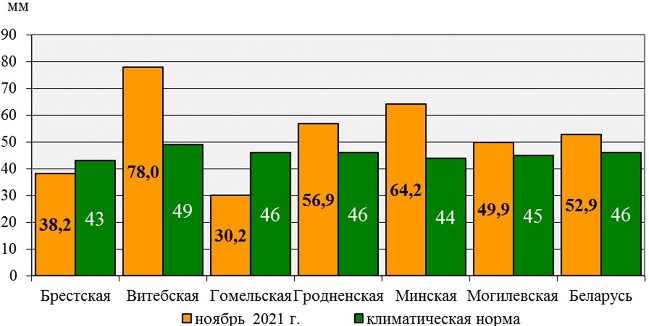 Rainfall for November 2021 and climate norm
by regions and across the territory of Belarus
During the month, precipitation fell unevenly. In the first and especially in the second decades, there was a lack of precipitation (82 and 49% of the norm, respectively), in the third, excessive moisture was noted (215% of the norm dropped out).

Rainfall and climatic norm
through the decades of November 2021 across the territory of Belarus
Precipitation fell in the form of rain, snow and sleet. For a month, the snow cover was established for a short time. On the last day of the month, the height of the snow cover ranged from 0.1 cm (High, Pruzhany) to 15 cm (Lyntupy).
In some places, an increase in wind speed by gusts of up to 15 m/s and more was noted. The maximum wind speed was recorded at Oshmyany station on November 20 (23 m/s). Fogs, snowstorms, ice and ice cover were observed in some areas.