The average air temperature for the winter season 2020-21 was -3.8 ° C, which is 0.2 ° C higher than the climatic norm. For the period 1881-2021 such and lower air temperatures in winter, on average, occur once every three years, and the last time was noted in the winter of 2012-2013.
The above zero air temperature anomaly was observed everywhere and on average in the regions of the country ranged from 0.1°С to 0.4°С.

Average air temperature and climatic norm
by winter months 2020-21 in the Republic of Belarus
The maximum value for this winter the air temperature reached on February 25 at the Brest station (+15.0°С), the minimum on February 19 at the Bragin station (-29.4°С).
A stable transition of the average daily air temperature through 0°С towards a decrease (the beginning of climatic winter) for most of the country took place on November 28-30  the first decade of December, 2-3 weeks later than usual, and in the extreme  South-West on January 10, more than a month later than usual.
During the winter of 2020-21, on average, 147 mm of precipitation fell across the country, which is 122% of the climatic norm. The maximum amount of precipitation over the winter fell in the Gomel region (163 mm or 145% of the climatic norm), the least amount of precipitation was noted in the Brest and Vitebsk regions - 131 mm (116% of the norm per season) and 132 mm (98% of the norm per season), respectively.

Rainfall and climatic norm
by months of winter 2020-21 in the Republic of Belarus
Precipitation in the winter of 2020-21 fell in the form of rain, snow and sleet. In the first or second decades of January, a stable snow cover formed throughout the country, in places reaching a height of 30-58 cm. Despite the intense snowfalls observed this winter, the historical maximum snow cover height was exceeded only at Gorki station (the maximum snow cover height for the winter 2020-21 was 58 cm, before that the absolute maximum was 53 cm (winter 2003-2004). At the end of the third decade of February, active destruction of the snow cover began in the country. On the last day of winter, its height ranged from 0.1 cm to 33 mm (at the Gorki station), and at some stations in the Vitebsk and Brest regions, the snow cover has already completely disappeared.
This winter, on separate days, fogs, snowstorms, icy-rime phenomena were observed in places, and icy roads were observed on the roads. During the season, 2 hazardous events were recorded: on December 29, at Orsha station, there was heavy ice with a 20 mm ice layer deposition, on February 4, very heavy snow fell in Stolbtsy (22 mm of precipitation fell in less than 12 hours).
The average wind speed for the winter season 2020-21 was mainly in the range from 1.0 to 4.0 m/s. In the extreme west and northeast, it reached a value of 4.2-4.4 m/s. The lowest wind speed on average for the season was recorded in the area of Vileika station (0.9 m/s). On some days of winter, an increase in wind gusts of up to 15 m/s and higher was noted. The maximum wind speed for the season (20 m/s) was recorded at Novogrudok station on December 29. 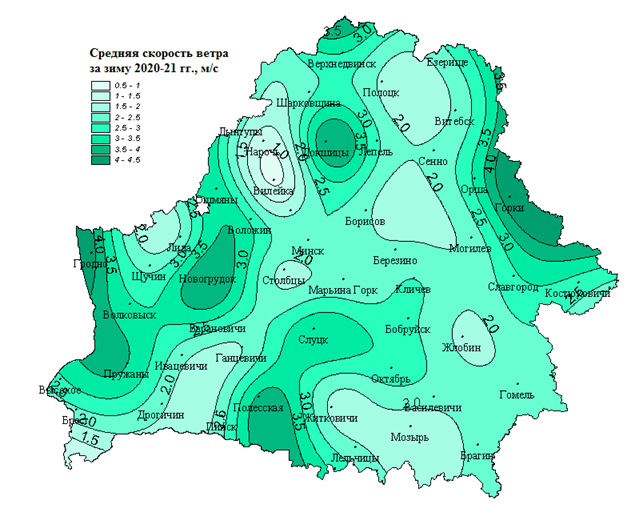