Overview of hydrological situation of December 10, 2021

During the past period (December 7-9), as a result of the established cold weather, ice-forming processes intensified on the rivers.
As of December 10, almost everywhere on the rivers of the country, ice formations are observed in the form of banks and sludge passages. Freeze-up and freeze-up with openings is observed on the Western Dvina near the urban settlement. Surazh and the village of Ulla and its tributary to the river Drysa near the village of Dernovichi, Viliya near the village of Steshitsy, Berezina near the town of Borisov, the tributary of the Sozh river to the Bered river near the village of Svetilovichi and the tributaries of the Pripyat rivers Goryn near the village of M. Vikorovichi and Sluch near the village Lenin. On the reservoirs Vileyskoye, Chigirinskoye, Zaslavskoye, Soligorskoye, Krasnaya Sloboda, as well as on lakes Chervone and Drivyaty, freeze-up and freeze-up with openings are observed, on Lake Naroch there are banks.
On the rivers of the country, there are sharp (up to 67 cm per day) fluctuations in water levels, as a result of ice jam.
In the coming days, the unstable nature of the weather will cause the destruction of ice formations in some parts of the rivers, and snow and water will appear on the ice. Sharp fluctuations in water levels will persist. 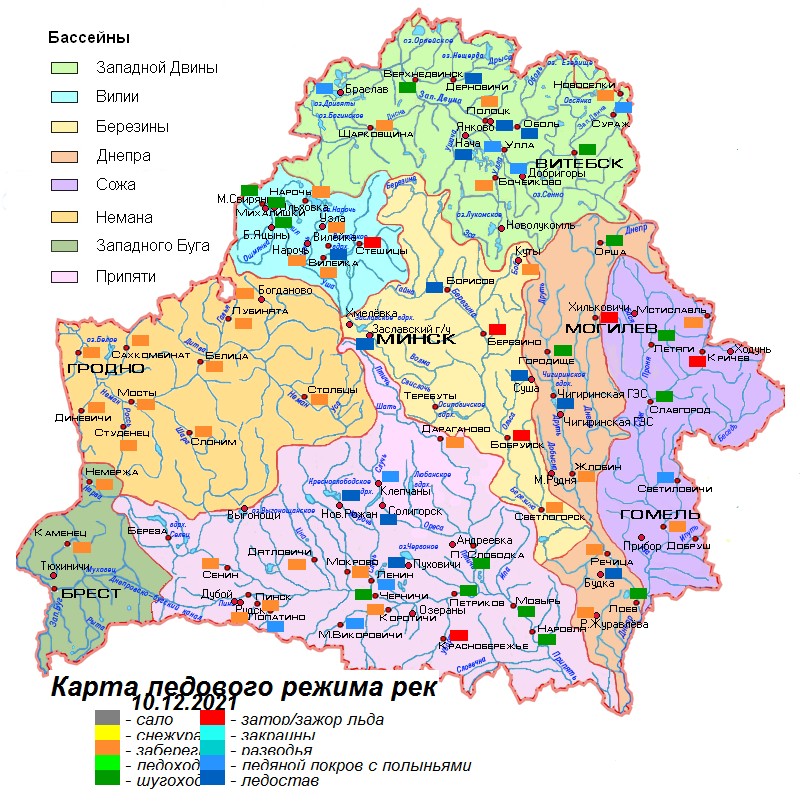