Forecast information on minimum water levels in rivers in September 2020

Overview of hydrological situation of August
In the first two decades of August, rivers showed mainly a decline in water levels and their even course. As a result, on the Western Dvina near Vitebsk, on the Dnieper near Mogilev, Zhlobin, Rechitsa and Loev, on the Berezina near Svetlogorsk, on the Sozh near Krichev, Slavgorod and Gomel conditions for river transport have become worse. On the Oster a tributary of the Sozh near the village of Khodun, the water level dropped below the mark of the water outlet to the floodplain. In the third decade, most rivers showed an increase in water levels due to precipitation. 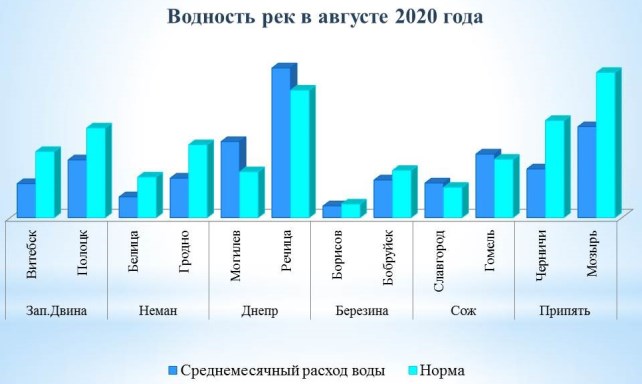 In August, water content of the Berezina was 15-20% less than the norm, the Western Dvina, the Neman, the Viliya, the Western Bug and the Pripyat were half of the usual for this time of year. Water content of the Sozh, the Dnieper near Orsha and Rechitsa was higher than the norm by 10-35% and the Dnieper in Mogilev-Zhlobin section by 55-65%.
Minimum water levels in certain sections of rivers of the Neman, the Viliya and the Pripyat basins approached multiyear minimums for August, and on the Yaselda near Bereza (a tributary of the Pripyat), minimum water level dropped below the historical minimum for this time of year.
Rivers are dominated by an increase in water levels as of the forecast date. On the navigable sections of the Western Dvina, the Neman, the Dnieper, the Berezina and the Sozh unfavorable conditions for the operation of river transport are observed.
Forecast information on the minimum water levels in September
Minimum water levels in September are projected below the multiyear averages for this time of year.